In web applications of Nablarch, asynchronous operation can be achieved by combining “Messaging Using Tables as Queues”.

For example, assume that a web application is taking too long to process a single request.

In this case, asynchronous operation can be realized by using the “Messaging Using Tables as Queues” as follows. 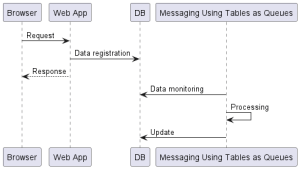 The sending emails functionality provided by Nablarch is based on Resident batch.

However, the sending emails is not supposed to be used for sending so many messages that multi-threading is required in the first place.
Therefore, when using the sending emails, there is no problem using “Resident batch” instead of “Messaging Using Tables as Queues”.

We are " Nablarch" development team.
"Nablarch" is a Java application development / execution platform that aggregates the knowledge gained from the system construction experience of TIS,Inc.
We not only develop Nablarch, but also prepare manuals, development standards, and learning contents necessary for system development in Nablarch, and respond to inquiries from engineers who develop systems in Nablarch.