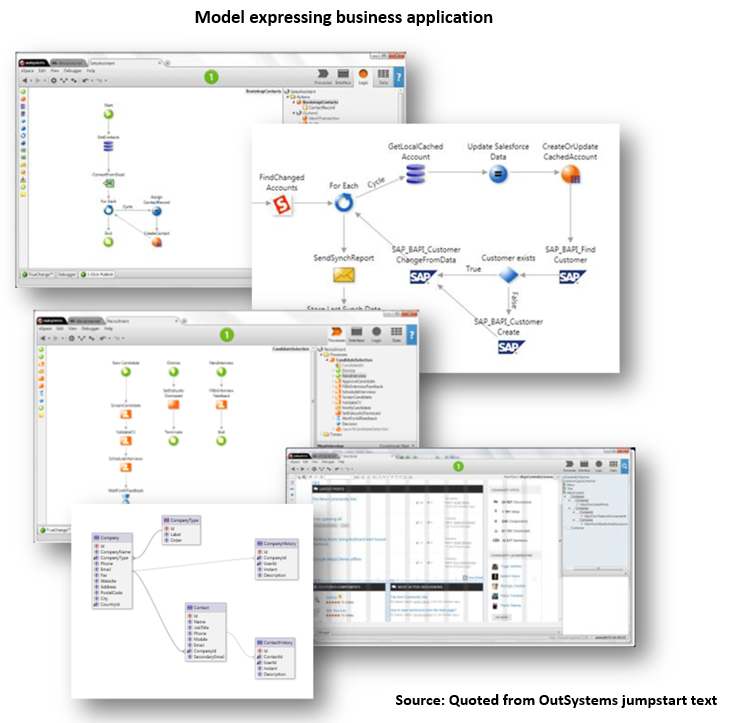 In OutSystems, the development and execution environments are integrated and OutSystems Service Studio is used for all processes, including development, testing and deployment.

The development and execution environment support both cloud and on-premise operations, enabling applications to be developed and released immediately, particularly when OutSystems’ public cloud environment is used.

In OutSystems, applications are expressed by four models: processes, interfaces, logic and data.

In OutSystems, the main features of screens are automatically generated as models from a database using the automatic generation feature. The user then completes the application by adding visual models using the GUI base tool.

OutSystems has a feature to automatically generate the following processes from table definitions.

As each screen contains the following features, no modifications need to be made for simple maintenance applications after they are automatically generated.

Visualization of the internal processes of widgets in interface

In OutSystems, the internal processes of the widgets that form the components of screens, such as database access, are visualized in an Action Flow.

The Action Flow below shows the process by which data in a detail screen is saved to the database. The flowchart visualizes the activation of the validation process, saving to the database, displaying messages and exceptional processes. 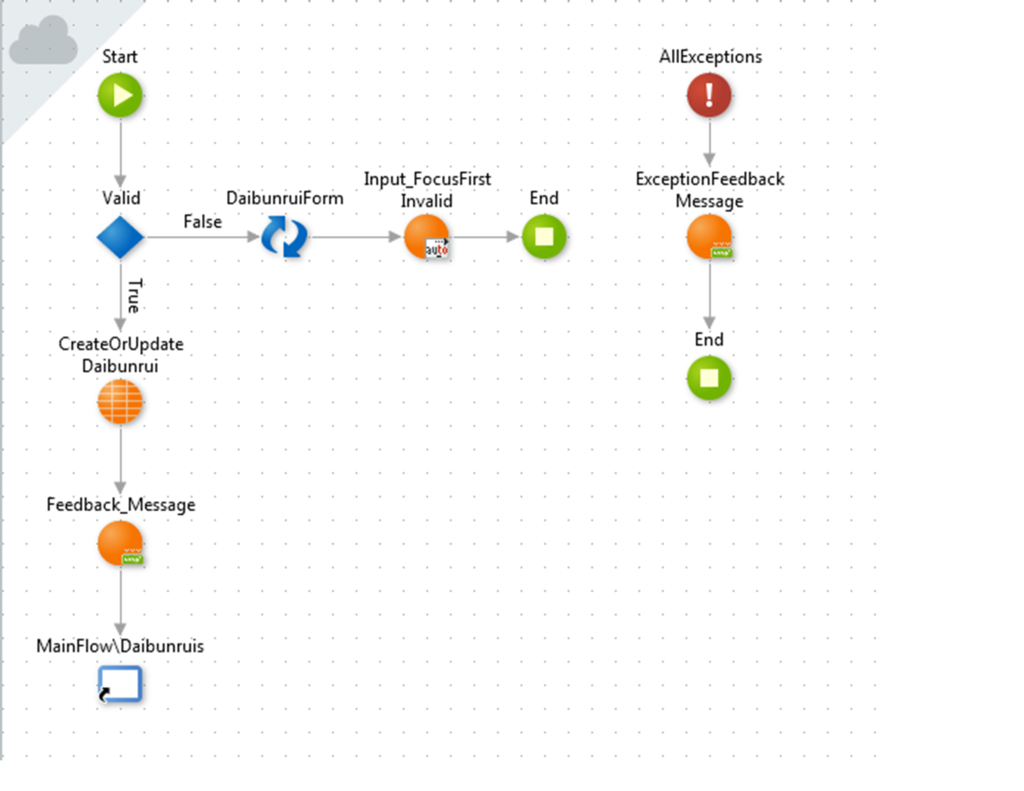 An Action Flow like the one above is generated by the automatic generation feature. This can be customized to add various other features.

Screens are generally made using templates provided by OutSystems. OutSystems also provides a large number of UI components that are frequently used in applications, such as toggle buttons, as design components (widgets), which users can assemble to customize screens.
Fine adjustments can be made, such as changing the position or decorations of the widget in the screen, but the HTML source code cannot be directly modified. Unique designs that are not included in the templates can be added using CSS created by the user.

Process logic can be generated in interface models and logic models. In both cases, the logic is expressed as an Action Flow and equation using the GUI base tool.
It is also possible to include code implemented in DLL or C#. Original components prepared in C# can be used to extend the logic, or existing materials from sources such as DLL can be reused.

As Action Flow support elements such as branches, loops and subprocess calls, they presumably enable a level of expression equivalent to standard programming languages, but there is a risk that they will become overly large for complicated processes. As mentioned earlier, these can be assembled with C# implementation to implement complicated processes while keeping the Action Flow slim.

A developer’s impression of this product

Below is a developer’s impression of OutSystems.
(This impression is based on the developer’s experience in building a sample application after attending the free seminar and learning from publicly available materials. A developer who pays to attend the full three- to five-day training may have a different impression.)

Internal operations of widgets, such as accessing databases, are visualized in OutSystems, so there tends to be a large volume of processing logic related to screens.The benefit of OutSystems is that internal operations can be assessed, making it easy to predict the specifications of operations during execution.
When I built the sample application, I didn’t fully understand the specifications of things like components, but I was able to predict the specifications of operations by referencing the Action Flow, which made it easy to find ways to customize them.In screens where an equation needed to be input, OutSystems not only provided an autofill feature but displayed objects such as widgets, data models and variables that could be referenced during coding, which enabled me to complete the code for referencing objects just by clicking.
This feature enabled me to develop the application without manual referencing.My impression was that this tool will be very easy to use for engineers who have a lot of development experience with languages such as Java.

Situations where OutSystems is effective

Below are the benefits of OutSystems and the situations it is suited to.